The Hilux is one of the better-known brand names on the market for trucks, and its 2015 edition has already managed to capture the hearts of auto lovers. And now, the limited Black edition arrives with some interesting new features, offering an even better deal for those who want some true power under their feet in offroad conditions.

The Black edition is based on a specific version of the 2015 Hilux, the 4-wheel drive 2-cab model with a turbo diesel engine, which is obviously no random choice – this is the most popular edition of the Hilux by far, and Toyota made a smart move to base the limited Black edition on it.

The company has produced very few trucks for this run – fewer than 1000 – so those who want to get their hands on one of the Black Hilux editions may run into some trouble. Knowing how the company has fared on the market previously with their limited editions, it’s safe to assume that those 1000 trucks will be gone soon, despite their hefty price.

How much does the Black Hilux cost exactly though? It’s priced at $53,240 for the manual edition and $55,990 for the automatic edition with a five-speed gearbox, but the extra price should definitely prove to be worth it for those looking for some extra luxury. It comes with 17 inch alloy wheels, side steps in stylish black, as well as a black sports bar and a highlighted trim.

The touchscreen available in the standard SR5 editions of the Hilux is also present here, and the truck comes with a rear-view camera and satellite navigation functionality. All in all, it’s a solid package for what it offers, and those who want to experience some true power and luxury on the road will definitely benefit from considering the 2015 Hilux as an investment, at least according to the current reviews going around.

Customer opinions of the standard Hilux and the SR5 edition specifically have been quite positive as well, so Toyota will probably have no issues trying to sell the Black edition as fast as possible. In fact, we wouldn’t be surprised if there is some market demand for additional copies to be produced, but knowing the way Toyota handles these releases, this probably isn’t going to happen. 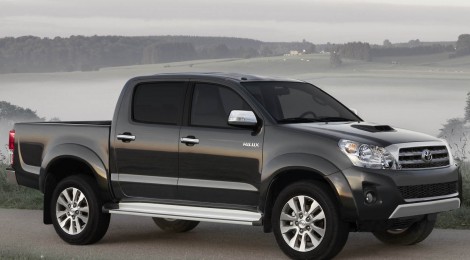 So, those who want to enjoy 2015 Hilux Black edition should hurry up – if it’s not too late already. Of course, it’s not the end of the world for those who miss it, as 2015 as a whole is shaping up to be a very good year for fans of serious trucks, with plenty of good offers on the market that are worth their price.